4th of July Chicken BBQ coming to an end

Quoting the old adage that "all good things must come to an end", the Pocomoke City Volunteer Fire Company announced that it will no longer hold their annual Fourth of July Chicken Barbecue on U.S. 13 effective this July Fourth weekend.

After much consideration and consternation, the fire company voted to end the tradition due to a myriad of issues including the massive amount of time and manpower required to set up, run and break-down the off-site, multi-day event. All food storage, preparation, cooking and serving equipment must be transported to the scene and set-up and operated in accordance health department standards. Once the multiple day barbecue is over, this same equipment has to be broken down and put back into storage. The total operation requires hundreds of volunteer man-hours by firefighters and auxiliary members.

Also, the gas fired apparatus utilized to cook the chicken at the barbecue site has reached its useful lifespan. Much of the equipment is custom made by welders and the cost to replace the apparatus will be at a tremendous expense. Other fire company needs are more pressing at this time, including the purchase of a new fire engine in the not-too-distant future.

The fire company is much appreciative to the tremendous support it has received from the local community over the many years that the barbecue has been held. It also understands that many look forward to and enjoy the famous barbecue chicken. So in lieu of the multi-day off-site event over the Fourth of July weekend, the Fire Company will conduct single day chicken barbecues at the firehouse. Rest assured that the chicken will still be cooked "using the firefighters' secret recipe". Once dates and times have been decided, the information will be shared on the fire company's website at www.pocomokefire.com or at the fire company's Facebook page. 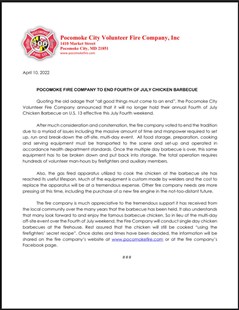